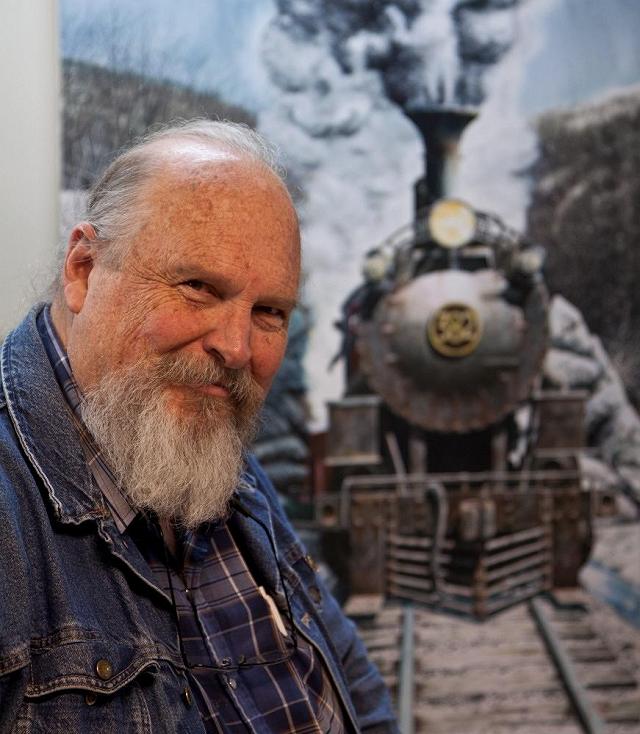 Stephen was born in 1946 in beautiful Ashe County, NC in the small town of West Jefferson.

Criticized for ‘doodling’ too much in class, he took his first art lessons at age 10 with Flossie Farr and Archie Black in the old block building across the street from the West Jefferson Elementary School.

After graduation from high school, Stephen studied Art for 2 years at Brevard College and 1 year at Guilford. He went into the Army in 1967 for 2 years and then returned to the high country to finish his degree in Fine Art at Appalachian State University in Boone, NC.

Stephen’s creativity was put on display for the next 9 years in Charlotte, NC at Collins Department Stores, where he was the visual merchandising manager. Finally, in 1983, Stephen began painting full time and hasn’t looked back since. He returned to his hometown in 1993 into the same house he grew up in where he now lives with his wife Nancy, a talented artist herself. These days, Stephen spends his days doodling and painting in his own studio in downtown West Jefferson.

Stephen was featured in “Our State Magazine” in 2007 as well as on “Our State” UNC-TV. He won “Best in Show” in a juried fine art competition and exhibition held at the Ashe Arts Center in West Jefferson in 2008. In 2009, Stephen’s work was chosen to represent the High Country at an exhibit in Miami, Florida and he has also had exhibitions in the Mint Museum in Charlotte.

The downtown West Jefferson’s arts district has more than 12 different murals that give the town its personality. Painted in 2001, Stephen’s Cut at Devil’s Stairs mural is located at a main gateway into town on US Hwy. 221 Business. Since then he's added 2 more, "Train at Jefferson Station" and "Rich Hill Baptist Church".  And, be sure to visit the Ashe County’s Public Library to see Stephen’s fun mural in the children’s section.

Very active in the community, Stephen has served as Town Alderman as well as on the Ashe Memorial Hospital board for. He’s also a member of the West Jefferson Methodist Church Building Committee, the Courthouse Preservation Organization, Elk Shoals Chapel Committee, the Old Hickory Boy Scouts Fundraising Committee and a past board member of the Ashe County Arts Council and West Jefferson Planning Board. It’s no surprise Stephen was awarded Ashe County’s individual “Volunteer of the Year” award for 2006. Stephen has donated prints and logos to a partial list of more than 25 community service organizations and local fundraisers. Stephen is also a former board member and regular teacher at The Paul and Florence Thomas Memorial Art School in West Jefferson. From drawing to whittlin’ to watercolors, Stephen has shared his talents with students from beginners to advanced.

Stephen's works can be seen all over Ashe County at local area businesses such as Ashe Memorial Hospital and all the LifeStore Bank branches. Stephen doesn't maintain regular hours, it's best to send him a message and set up an appointment.